Hello “callsign Hanna”, thank you for your time and your interview. For us it is impossible to know how the sport airsoft spreads all over the world and which specific rules the countries have. So we invited you to join this interview, because phil has found you on facebook, instagram & Youtube and also likes sweden a lot.
So lets go over to some questions.

combat-as.com: First of all please tell us something about you in your non-player life.

callsign Hanna: I´m an outdoor person so I spend a lot of time hiking and training with my german shepherds. I´m an entrepreneur as well, running my own marketing company doing social media, photography and strategy for big and small enterprises.

combat-as.com:How and in which age did you get into the airsoft scene?

callsign Hanna: Well, I was not 18 though I started to play seriously when I turned 18 and got my first proper gun. Been playing for + 10 years now though bit a few breaks (I lived in India for quite a while). 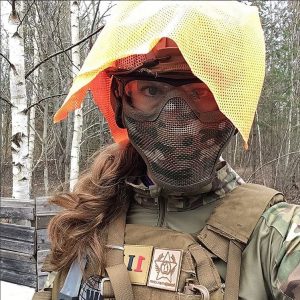 combat-as.com: What means airsoft to you. Which word is the best discription for airsoft in your mind?
1. Wargame 2. Sport 3. Tactical Training 4. Go out with friends and have some fun

callsign Hanna: Go out with friends and have some fun!

combat-as.com: How often you go out and play?

callsign Hanna: Once or twice per week! 😀 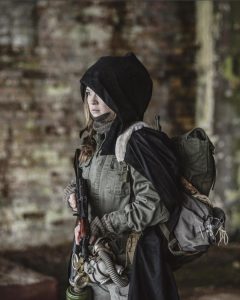 combat-as.com: Joined a german skirm/spot in your player time? If no -would you like to?

callsign Hanna: Would love to go to Germany and play at some point but your laws are so complicated so IÕll probably head to Poland, the Netherlands and the UK first.

combat-as.com: Phil sees you made a lot of promotion for the female players to come in. How you think about women in airsoft?

callsign Hanna: I want to encourage as many women as possible to play airsoft. I want more people to join this community and I have made it my mission to #growthesport. Especially by supporting women who want to play. I also want to change the industry and make it more welcoming to all kinds of people. ItÕs time for companies to leave booth babes and gun bunnies behind and for them to start providing products and marketing materials that are not degrading women. For the sake of their own brand! 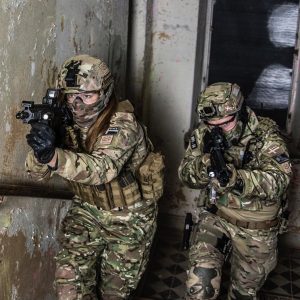 combat-as.com: What is your favourite primary weapon and why it is?

callsign Hanna: I run two, one ASG Armalite Assault Value Pack M15. ItÕs cheap, works great for CQB straight out of the box and you can start playing immediately. I have upgraded mine now and fine tuned it for CQB but as I said, runs great from the box and it is a good Ófirst gunÓ kind of gun I reckon. The other one is an ASG Devil 7 inch M15 which I will upgrade and modify to becoming a light weight woodland gun. Will get a suppressor and a precision barrel as well as upgrading internal parts. Also this one runs great from the box and I think it is important to know that you donÕt have to start upgrading and buying super expensive stuff to start playing airsoft. 🙂

combat-as.com: And your favourite secondary?

callsign Hanna: A Colt 1911 GBB though I mostly run withoutÉ thatÕll change though since I now run more CQB than before. I have mostly played woodland with greater distances – hence the lack of secondary gun use.

combat-as.com: Have you a favourite brand of custom parts for your weapon?

callsign Hanna: Madbull (though not custom per se)

combat-as.com: Which camo you use in the skirms in sweden? So multicam is real hyped in germany, it is a good camo but not the best always.

callsign Hanna: I´ve got multicam for CQB and spring/autumn. Otherwise I like atacs FG and OD. I might put a fleckarn kit together, just for the fun of it. 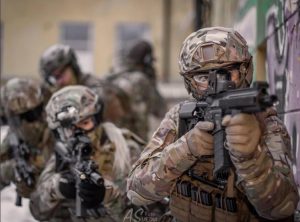 combat-as.com: Have you special brands for our clothing in airsoft?

callsign Hanna: I use a lot of budget stuff from 101INC (from the Swedish store www.rodastjarnan.com) but I really like my combat shirt from Helikon-Tex and IÕll soon be a happy owner of Clawgear pants. I have not bought Crye and I do play in any old clothes sometimes or in my Stalker kit.

combat-as.com: Can you tell us a little bit of the sweden airsoft scene?

callsign Hanna: Swedish players are generally very nice and humble. Especially the guys who are supportive and welcoming towards girls deserve a shoutout. I think men who play in Sweden can be role models to guys from other places. There are some fuckboys here as well but I have met so many great guys. 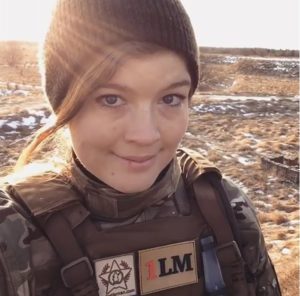 @darkfoxairsoft and Adepteon from @ravenwoodsecuritygroup are two guys I met quite recently when I went to a new field all alone, they are great! As are the guys from Fireteam Legacy (which I have now joined) and the MIFFO team. Sadly there are not many girls at my local sites – yet. I´ll make sure to change that! All in all, the community is amazingly supportive and welcoming!

combat-as.com: Have you any country where you want to play airsoft once in a lifetime? As example Phil says he wanted to play in sweden once in a lifetime because he loves the country and the nature. Have you something like this?

combat-as.com: Can you play airsoft in sweden everywhere? -Like you can camp and making fire everywhere?

callsign Hanna: No, you cannot.

combat-as.com: What is important for you to say to the german female Airsoftplayers?

callsign Hanna: Keep playing, invite more women and treat everyone with respect. Take your hits, remember it is just a game, tell people off if the don´t treat you well and make sure to join the Women of Airsoft group on Facebook if you want to discuss any airsoft related issues with fellow slaydies.

combat-as.com: Can you tell our readers your social network links that they can join your pages? 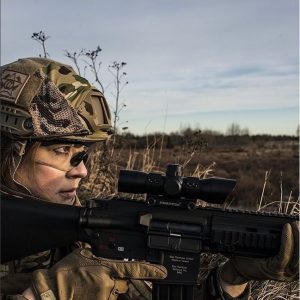 combat-as.com: Any greetings? You can also tag your friends with link to social media.

combat-as.com: Thanks for your time, your pictures and your answers. We are very proud that you joined our interview and give us a little look inside your country and your life. We from combat-as.com hope that we can join each other anytime to play with you. Also we hope we can see a lot more pictures and Videos of you and your friends playing airsoft in sweden or elsewhere. Maybe we can meet up for a new interview in a year to see what happend between now and then. We wish you all the goods you can take for your carreer and your social media platforms.

callsign Hanna: Thanks for inviting me to participate!

View all posts by morpheus →